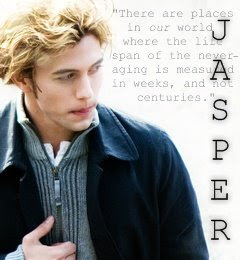 Hey guys here is a short biography of Jackson Rathbone! Just some fun information. Enjoy!
Rathbone was born in Singapore and has lived from places ranging from Indonesia to Midland, Texas. He started out in local theatre, The Pickwick Players. In high school, he went to Interlochen, a private school for the arts in Michigan. After graduation, he had planned to go to the Royal Scottish Academy but went to LA to experiment with the big screen. He immediately signed onto Disney's 411. He had a leading role in the ABC Family show Beautiful People, which premiered in fall 2005 and the second half of the first season began in spring 2006.
Posted by Hannah and Jill at 2:33 PM

my friend is love with jasper lol :-)