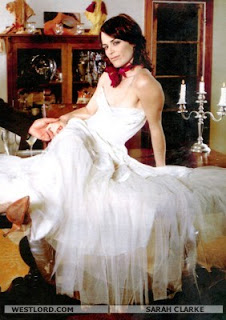 After minor roles in film and television, including guest starring on Ed and Sex and the City, and an Outstanding Performance award at the Brooklyn Film Festival (for her short film Pas de Deux), Clarke auditioned for the role of CTU agent Nina Myers, on 24 in 2001. She got the role the same day filming began.
She moved to New York and continued to study acting at Circle in the Square, also working with Robert Wilson, Axis Theatre Company and The Willow Cabin Theatre Company. She played the role of Madeline in the 24 Hour Plays production "k, x, z and y".Her first movie role was starring in Nara Garber's short film "Pas de Deux" for which she won a CiNY Award for Outstanding Performance at the Brooklyn Film Festival.She was the actress in the award-winning VW Jetta commercial "Synchronicity."She made guest appearances in "Ed" and "Sex And The City", and starred in the independent film "The Accident" before landing a part in FOX's drama "24". For the part of Nina Myers she won a Golden Satellite Award for best performance by an actress in a supporting role in a drama series.She also had a small part in the critically acclaimed movie "Thirteen" and she recently starred in "Happy Endings".
Sarah won an Outstanding Performance award at the Brooklyn Film Festival, for her first short film, 'Pas de Deux'.
Sarah was a last-minute casting choice as Nina Myers in 24. Her character shocked fans of the show when, in the final episode of series one, she killed Teri, the wife of hero Jack Bauer. Sarah was given the part of Nina Myers on the same day she filmed her first scenes for 24's pilot episode. She wore her own shirt for the episode, and a replica had to be made for future shows. She only found out that her character in 24 was going to be a mole, five episodes from the end of the series.
Posted by Hannah and Jill at 4:20 PM