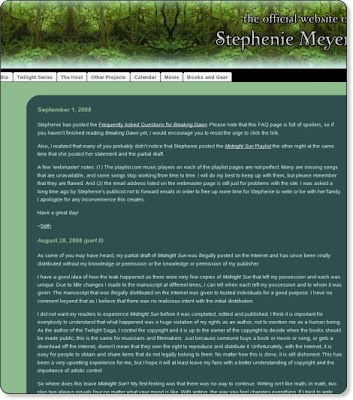 Stephenie Myer has officially deleted her myspace page. She said "I am taking down my bloated myspace page. It was a lot of fun while it lasted, and I really miss the early days when I could hang out with people online. Many of you are hilarious and insightful, and I wish it was easier for me to talk to everyone the way I used to." it must be to hard for her to talk to all those people at the same time! Now the only website she actually has is StephenieMyer.com.
Posted by Hannah and Jill at 12:01 PM No comments: 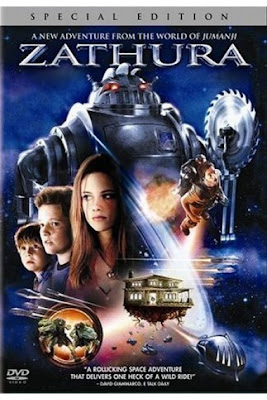 Kristen Stewart plays Lisa in a movie called Zathura. Zathura was made in 2005. Imdb.com says "Danny and Walter are two brothers who barely get along even while driving their parents to distraction as their older sister tries to ignore them. Despite their squabbling, the brothers manage cooperate enough to play an old mechanical board game named Zathura. However, after their first move, they find that the game has apparently flung them, their sister and their entire house into outer space. Furthermore, the brothers surmise the only way to return home is to finish the game. However with almost every move, new dangers arise as the siblings find themselves learning to cooperate in ways they never expected as they realize what they mean to each other."
Posted by Hannah and Jill at 9:09 AM No comments: 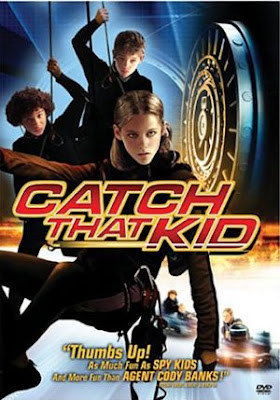 Kristen Stewart is also in an other movie called Catch That Kid. This is a Disney Chanel movie that was made in 2004. It's rated PG. Imdb.com says "This is the story of a twelve-year-old named Maddy. Maddy and her adventurous father have always shared a love for mountain climbing. Their hobby, however, has a disastrous effect when a devastating accident on Mount Everest injures his spine, paralyzing him forever--unless he gets a very expensive operation. Determined to procure the money to pay for his surgery, Maddy decides to recruit two of her friends, a computer genius and a mechanical whiz kid, to help her pull off a risky heist. They plan to break into the local super-high-tech bank, which holds a vault suspended 100 feet off the floor, and get to its safe. To complicate matters even further, Maddy's mother works as the security chief at that very bank. Regardless of what obstacles she faces, Maddy is determined to get to the funds her father needs, by using the amazing climbing skills he taught her."
Posted by Hannah and Jill at 10:39 AM No comments:

Praise for The Messengers 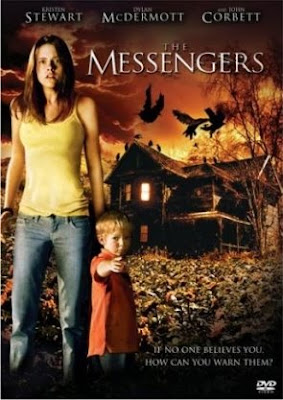 I watched the messengers recently and it was so good! kristen does an outstanding job and it is definatly worth seeing if you haven't already!!
Posted by Hannah and Jill at 8:10 AM No comments: 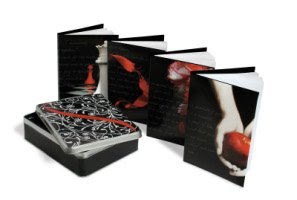 The Twilight Journals set includes four gorgeous journals packaged in a collectible keepsake tin, inspired by Twilight, New Moon, Eclipse and Breaking Dawn (see picture to the right). Each journal features the beautiful and instantly-recognizable Twilight Saga cover art and is fully-designed throughout with images and decorative quotes from each of the books, as well as some of the classic works of literature that inspired them. (October 13, 2009; $24.99)

i found these on stepheniemeyer.com as well as tons of other useful stuff i will post later!
Posted by Hannah and Jill at 12:14 PM No comments:

Here is a link to the official New Moon trailer!!! You have to check it out! The wolfs look great!!!

http://vids.myspace.com/index.cfm?fuseaction=vids.individual&videoid=58185785
Posted by Hannah and Jill at 11:17 AM No comments: 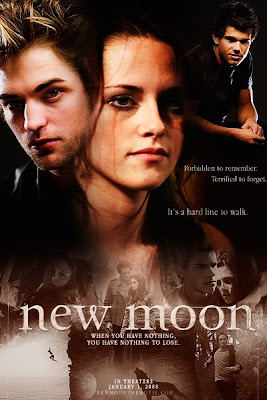 New Moon is going to be awesome and we are sure the new directors ideas for the wolfs look amazing!!!!!!! don't forget to keep posted so we can let you know more about the making of NEW MOON!!!!!!!
Posted by Hannah and Jill at 9:20 AM No comments: